We Energies celebrates Earth Day all year round

April 22, 2016, marks the 46th anniversary of Earth Day. Earth Day was created by Gaylord Nelson, a U.S. Senator from Wisconsin. Nelson’s mission was not only to create awareness about air and water pollution but also to make environmental protection part of the national political agenda. His idea was a success, and as the years passed, his idea led to the creation of the U.S. Environmental Protection Agency as well as the Clean Air, Clean Water, and Endangered Species acts.

We are committed to practicing responsible environmental stewardship in the communities we serve. We’re helping protect several threatened and endangered species. From peregrine falcons and ospreys to Karner blue butterflies and wood turtles, we’ll highlight a different initiative every day this week – all leading up to Earth Day. 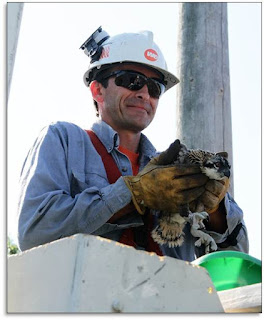 Ospreys frequently try to nest on top of our power poles, which can result in power outages and harm to the ospreys.

Since 1980, our field crews have constructed alternative nest structures for the birds, in areas where nests are known. Our crews have assisted private and public land owners in erecting nest structures in key habitat locations. We’ve helped install dozens of osprey platforms in Wisconsin and Michigan’s Upper Peninsula. These efforts have supported the recovery of ospreys, which now exceed more than 500 breeding pairs in Wisconsin alone.

Ospreys remain listed as a special concern species in Wisconsin after their population declined significantly in the 1950s and ‘60s due to widespread use of pesticides such as DDT.

We are working with the Wisconsin Department of Natural Resources to erect several new nest platforms in Racine and Kenosha counties on public lands near the Fox River. Ospreys have been observed frequenting these areas in recent years but have limited nesting opportunities. These additional platforms will aid overall osprey recovery.
Posted by We Energies at 8:00 AM