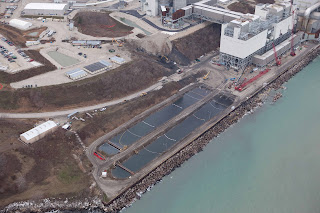 The recent aerial photo (at right) shows the extensive progress made since a bluff collapse occurred at our Oak Creek site on Oct. 31.

A 40-ton trailer pulled from the shoreline on Nov. 21 was the final large item to be removed. All items that potentially could have contained fuel or other oil-based fluids also are out of the water as well as the majority of the smaller construction items.

Additionally, the U.S. Coast Guard, the Wisconsin DNR and We Energies have jointly concluded that the amount of material that went into Lake Michigan as a result of the collapse is far less than originally estimated. The original estimate of 2,500 cubic yards was a very rough, very preliminary estimate made on the day of the collapse. Now that the Coast Guard, DNR and We Energies have had a chance to thoroughly examine the bluff collapse site, we believe that approximately 725 cubic yards of dry material is the amount that entered the lake.


Read statement on latest information available on bluff collapse and amount of material that went into Lake Michigan. [PDF]

Remaining work includes removal of small debris, additional sediment sampling and restoration of the seawall. The bluff has been stabilized, and the material that slid down the slope has been removed from the area.

We continue to work cooperatively with the DNR, U.S. Coast Guard, U.S. Fish and Wildlife Service and Environmental Protection Agency on the safe and responsible cleanup of the site. We used both land-based and marine-based cranes to lift materials from the water. Most of the material that slid down the now-stabilized slope has been removed.

A portion of the expenses, such as those incurred to remove material and equipment that washed into lake, will be incurred by the company this year as an operational expense and will not be passed on to customers. Completing the root cause analysis of the bluff failure at the site is necessary before we can accurately answer the entire question of who will pay for the recovery costs. Results of the root cause analysis, for example, will help determine whether insurance coverage will apply for any of the costs.

About a dozen personnel were working in the vicinity at the time of the incident. We accounted for all workers, and no injuries were reported. Most of the construction workers were able to resume work.

Some of the material that washed into the lake included coal ash used in the 1950s to fill a ravine on the site, which was a common practice by utilities at the time. The practice was discontinued several decades ago.

Coal ash is made up mostly of silica, which is similar to sand, and has not been classified as carcinogenic by the EPA. The agency currently classifies coal ash as nonhazardous. Coal ash is re-used in many ways, including road building and construction.
﻿

A 57-year tradition continues tomorrow, when we host the Milwaukee-area Boy Scouts participating in the Electricity Merit Badge Clinic in our Public Service Building auditorium.

Ted Sniegowski and Dennis Mersenski, employees at our Oak Creek plant, organized the clinic again this year. “This is a great opportunity for Boy Scouts to learn about electrical safety and careers in the utility business,” Sniegowski said. “Our company’s commitment to the merit badge program has helped thousands of youth develop technical skills and master the basics of electricity.”