The city of Milwaukee is working cooperatively with us to find options to reduce initial estimates of utility relocation costs associated with a proposed trolley in downtown Milwaukee.

As with other large projects that are not viewed as projects needed for safety, health or public welfare, the majority of the utility relocation costs are paid by the project owner and not We Energies customers. In this case, the project owner would be the city of Milwaukee. The Public Service Commission of Wisconsin is currently studying this issue and will provide a report at a later date.
Posted by We Energies at 8:26 AM No comments:

We recently received our 14th consecutive Tree Line USA Utility award. Sponsored by the Arbor Day Foundation in cooperation with the National Association of State Foresters, the award recognizes our efforts to provide dependable and reliable service, while using best-practice vegetation management techniques.

When tree trimming is required in residential right of way or on private property, we know that our customers take an active interest in the work being performed. We inform our customers about our forestry procedures, sending information prior to starting a trimming project. In addition, we recently produced a video that reviews our trimming practices to assist in communicating the forestry process.

Posted by We Energies at 9:03 AM No comments:

Our stockholders are sponsoring 110 veterans on the Stars and Stripes Honor Flight scheduled to depart for Washington, D.C., on April 28. Through the Wisconsin Energy Foundation, we have been a partner of the Honor Flight program since its inception.

In addition to the April flight, we are sponsoring the Field of Honor event to honor veterans and their families at Miller Park on Aug. 11. The public is invited to attend The Field of Honor: A Salute to the Greatest Generation. Tickets are $11 (plus a service charge) and may be purchased through the Milwaukee Brewers ticket office. All proceeds go to Stars and Stripes Honor Flight program to fund future flights.

Event highlights include:
We had several connections to the war effort in the 1940s. Men who were called up for service traveled to downtown Milwaukee via our interurban trains and busses on their way to Fort Sheridan (U.S. Army) or the Great Lakes Naval Base in Illinois. Our Public Service Building Auditorium served as a site for new inductee orientation and a venue for USO dances. More than 1,000 of our employees were called into active duty in World War II; 16 died in service to their country. Advertisements on our trollies urged citizens to buy War Bonds.

“Through this event, we hope people take away that our country owes a tremendous debt of gratitude to our veterans for their service. These are people who didn’t feel like they were heroes. They provided an incredible service for our country. They served because they felt it was the right thing to do.”

Stars and Stripes Honor Flight website
Posted by We Energies at 1:05 PM No comments:

Our Environmental department orchestrated a prescribed burn of about 30 acres of prairie land at our Oak Creek Power Plant site on April 6. The site contains about 75 acres of wetlands and prairies.

As part of the permit from the Army Corps of Engineers to build the new units at Oak Creek, we are required to maintain and improve the wetlands and prairies on the plant grounds. Conducting a prescribed or planned burn helps to remove dead vegetation that can smother young plants. The resulting ash from the burn also nourishes the healthy prairie plants.

A burn such as the one recently completed is scheduled about every three to five years, according to Susan Schumacher, senior environmental consultant, depending on vegetative growth.

Midwest Prairies, a contractor with the expertise for controlled burns that frequently performs environmental restoration work for our company, conducted the burn.

The date chosen for the burn depends on weather. Conditions must be dry, with low wind speeds. Often, a specific wind direction is required. Meeting all of these conditions ensures that the fire line moves in a desired direction across the prairie and can be controlled at all times. 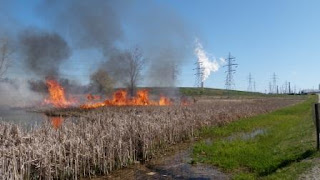 This site is located to the northwest of the main plant entrance, across Highway 32. A back burn is ignited first to create a large firebreak. After the back burn is complete, a head fire was ignited, which burned through the cattail marsh toward the back burn location.

We began disconnecting service April 16 to Wisconsin and Michigan residential customers who are behind in their payments.

Being a regulated utility, many rules govern how we conduct our business, including the actions we can take to collect payment from customers who are in arrears. Disconnecting electric service is a measure we may take to collect payment; however, during the winter months (Nov. 1 through April 15), disconnections to residential customers in arrears is suspended by law.

The end of the moratorium can be a challenging time for customers. We take action to help customers stay connected rather than become disconnected. Our actions include:

Business accounts (commercial and industrial customers) are exempt from the moratorium and may be disconnected for nonpayment anytime throughout the year.

“We encourage all customers who are experiencing difficulty in keeping their accounts current to contact us,” said Jodi Wire, director – credit and collections strategy and operations. “We can offer payment plans to help them avoid the loss of their energy service. We use disconnection of service as our absolute last resort.”
The actions we take include:
“Our goal is to provide effective and efficient solutions to meet the special needs of our low-income customers,” said Wire.

If you or someone you know is struggling to pay their We Energies bill, encourage them to contact us at 800-842-4565. Also visit we-energies.com to learn about available resources, including:
Customers have the option to self-serve or speak with a representative: