On the heels of National Engineers Week, kudos to those who are inspiring the next generation of engineers. Several We Energies employees, including Sue Clausing, Tony Militello and Greg Schroeder, volunteer their time with Future Cities, an organization that encourages students to be motivated in science, technology, engineering and math and other 21st-century skills.

Clausing’s Future Cities team participated in a national competition in Washington, D.C., Feb. 17 to 20. The team prepared for their time in D.C. by presenting their project at the National Engineers Banquet in Milwaukee at the Italian Community Center Feb. 15.

Clausing and her husband, Kevin Walsh, mentor a Future Cities team from St. Alphonsus School in Greendale, Wisconsin. Their group of six eighth-graders was the only Wisconsin team invited to nationals. They earned their spot by winning a regional competition at the Milwaukee School of Engineering in January.

The St. Alphonsus team designed a city called “Sedai” which means “generations” in Japanese. That was consistent with the competition theme, which encouraged teams to design a senior-friendly city 100 years in the future.

Clausing’s team earned special honors for “Best Project Plan.” The students used SimCity to create a virtual city, did research, conducted interviews, wrote an essay, created a physical model and presented at regional and national competitions to panels of judges.

“The program is really great because it exposes students to different STEM fields, project planning, and presentation and research skills,” said Clausing.
Posted by We Energies at 10:26 AM No comments:

If you didn’t make it to 2018 Winter Games in Pyeongchang, don’t worry; there’s still a chance to be like an Olympian.


Five-time gold medal-winning retired Olympic speed skater Bonnie Blair shared her recipe for “Killer Brownies” in the 2016 Wisconsin Heritage Edition of the We Energies Cookie Book. Now it’s your turn to submit your favorite recipes from a past Cookie Book along with a favorite holiday tradition or memory. Blair’s favorite memory of her brownies is how they got their name – her sister tried them and called them “absolutely killer brownies,” and the name stuck.

To celebrate Dr. Martin Luther King Jr. and Black History Month, the Milwaukee Bucks turned to the youth of our community at the Feb. 2 game with the New York Knicks at the BMO Harris Bradley Center. At halftime, first-, second- and third-place winners of each of the six grade divisions of the We Energies Dr. Martin Luther King Jr. Speech Contest were honored on the court.
Eleventh-grader Ariana Cawthorn of Eastbrook Academy, and first-place winner of the grade 11-12 division, addressed the crowd.
“Some believe silence keeps problems at bay, and that if no one speaks them, maybe they’ll the problem will go away. But no, I stand here to testify that that is not the way,” she said. Her remarks elaborated on this year’s contest theme, “Take a stand for truth and justice.”

Fans congratulated Cawthorn on her encouraging words as she made her way back to her seat in the arena.

We Energies has sponsored the speech contest for more than 30 years. This is the fourth season that the winning students have been honored at a Bucks game.

Posted by We Energies at 9:41 AM No comments:

Our crews are wrapping up their third week of power restoration in Puerto Rico and reporting good progress. They continue to work in the San Juan area, where they’ve been able to restore several neighborhoods that had been without electricity since September. 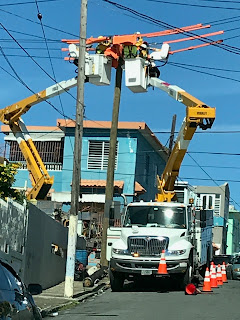 “The people of Puerto Rico are so appreciative,” said Bruce Sasman, who’s been leading crews from both We Energies and sister company Wisconsin Public Service. “Everywhere we go, people are waving to us and giving us a thumbs up. When we restore power, people are coming out of their homes, crying with joy and hugging our line mechanics.” 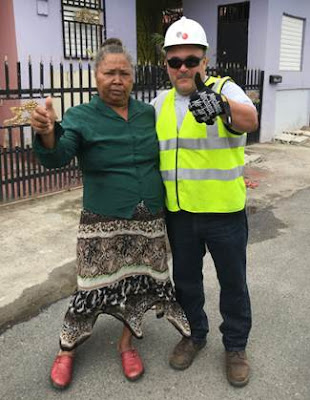 Crews have been staying in a hotel that sustained hurricane damage and remains closed to the public. Their day starts with breakfast at 5 a.m. Crews are then bused to a staging area to get their trucks and equipment. They’re typically heading to their worksites by 6:45 a.m. and then spend about 12 hours working in the field. They debrief around 6:45 p.m., take the bus back to the hotel, eat dinner and go to bed ‒ for six weeks.

“It’s exhausting, but the crews are getting encouragement from the residents of Puerto Rico,” said Sasman. “That’s their motivation.” Listen to the cheers from school children after crews restored power at their school:

Aside from the overwhelming support from Puerto Ricans, our crews also have received compliments from line crews from Con Edison, an energy company based in New York City. On more than one occasion, Con Edison workers have told our employees how impressed they are by their determination to repair outages and restore customers in all circumstances.

“They actually said, ‘We’ve seen their abilities, and we want them to be working with us,’” Sasman said. “People think we really do a good job. People really want to work with us. They hold us in very high regard, and that’s really nice to see.”

The work conditions have been challenging and dangerous. Sasman relayed details of one job that took workers four days to complete. There was more than a mile of cable to restring on mountainous terrain. The crew worked along a narrow, one-lane road which had to be shut down to ensure workers’ safety.

“While a language barrier exists, the compassion barrier does not,” said Sasman. “People are opening up schools and churches for us, feeding our crews. It’s emotional, and it’s very rewarding.”

Posted by We Energies at 3:31 PM No comments: