Use energy wisely this Thanksgiving

If you’re preparing Thanksgiving dinner and entertaining friends and family this year, consider these money-saving tips to control your energy costs. 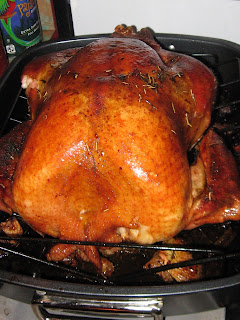 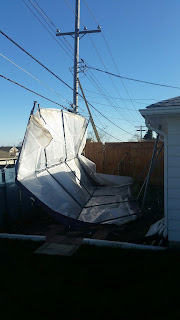 Strong winds and rain passed through our service territory over the past couple of days. Our crews have been busy. They have restored power to 14,500 customers over the last 24 hours.

We often see tree branches come in contact with our equipment and cause outages. Other unusual debris, however, also can become entangled in our wires.

This morning, our crews discovered a small greenhouse entangled in our wires on the south side of Milwaukee. High winds caused the greenhouse to flip into the wires, causing a power outage.

About 1,400 customers were affected by the incident. All but one had power restored within 45 minutes.

This incident did not cause downed lines, but if you come across downed power lines, or anything touching those lines, stay at least 25 feet away and call 911.
Posted by We Energies at 1:55 PM No comments:

Marine veteran and 17-year We Energies employee, Joe Griffin currently works as manager – power generation support in Oak Creek. What might surprise you: He sees many similarities between his current role and work during his deployment aboard Naval shipping.

A team focus about health and safety is as important to We Energies as it is to the Navy/Marine Corps team.

“In the military, you are one big family. We Energies is one big family, too. You have to rely on the person next to you to stay safe. It’s no different than when I was deployed Naval shipping,” added Griffin.

Griffin was a sergeant in the Marines and spent most of his career in the military police. He also was deployed in the Mediterranean to conduct naval exercises with U.S. allies. In addition, he was deployed to Monrovia, Liberia, where he was part of a noncombatant evacuation of U.S. civilians during the First Liberian Civil War in 1990.

Nov. 11 is Armistice Day, more commonly known as Veterans Day. The day celebrates and honors America’s veterans for their willingness to serve. We Energies has a history of commitment to veterans with generous contributions to Stars and Stripes Honor Flight and Fisher House Wisconsin.

A few years ago, Griffin represented We Energies at a check presentation at Fisher House Wisconsin, where military and veterans’ families will soon be able to stay while loved ones receive treatment at the Clement J. Zablocki V.A. Medical Center in Milwaukee. Fisher House Wisconsin broke ground in June 2014 and is expected to be completed soon.

We salute Griffin and the many other veterans in the We Energies family this Veterans Day.
Posted by We Energies at 11:41 AM No comments:

Veterans Day: Transitioning from the military

Nov. 11 is Armistice Day, more commonly known as Veterans Day. The day is set to celebrate and honor America’s veterans for their willingness to serve. We Energies has a history of commitment to our veterans in a variety of ways, such as Fisher House Wisconsin and Stars and Stripes Honor Flight.


We Energies has a long tradition of recruiting transitioning military to fill its employee ranks. Cody Hughes, operations supervisor at West Allis Operations Center, is one of the many veterans to make that transition.

Hughes started his military career in the Navy ROTC at Purdue University. He had a strong internal drive to serve his country. A tradition of serving the country and community runs in his family. His father is a firefighter and his grandfather was in the Army Reserves.

Hughes joined the Navy and served two tours overseas in the Persian Gulf and the Horn of Africa. He did many jobs during his six years in the Navy, but the job that helped him the most with his transition to We Energies was as an engineering officer on a destroyer.

“Part of the engineering background helped with my transition into We Energies, but mostly the Navy teaches you to be a leader and gives you a diverse skill set,” said Hughes.

At a job fair for transitioning from the military, Hughes met with a number of different employers; We Energies particularly caught his eye. He was hired to work in bulk material handling. Hughes moved up the ranks to supervisor in major projects.

Hughes added, “We Energies has a strong commitment to military. In certain work areas, working here was a natural progression for me and for other people like me.”

We salute Cody Hughes and the many other veterans in the We Energies family on this Veterans Day.
Posted by We Energies at 8:47 AM No comments: 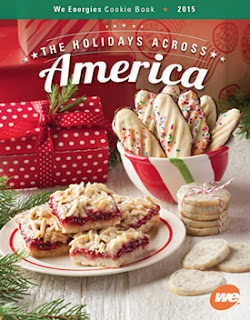 The 2015 We Energies Cookie Book takes customers on a culinary cross-country tour. From New York to Wisconsin to California, the newest edition of the Cookie Book features recipes from across the United States.

Titled “The Holidays across America,” the 2015 Cookie Book includes 51 recipes – one from every state and Washington D.C. The recipes were submitted by family and friends who have a special connection to Wisconsin.

Signature distribution events are scheduled for Saturday, Nov. 7, 9 a.m. to 1 p.m. at Miller Park in Milwaukee and Fox Cities Stadium in Appleton. Customers are invited to enjoy hot cocoa, take a picture with Santa’s reindeer and pick up a free copy of the Cookie Book.

“For nearly 90 years, it’s been an honor to share our Cookie Books with our customers,” said Gale Klappa, chairman and chief executive of We Energies. “We hope this year’s edition will become part of our customers’ family traditions for generations to come.”

The We Energies Cookie Book dates back to 1928. Dozens of old editions, many considered collector’s items, can be found at www.we-energies.com/recipes.