Imagine waking in the middle of the night to find a bear trapped at your house.

“It was around 1 a.m. on June 20, and my wife and I heard this sound like, ‘Ma! Ma!’” recalled Steve Sickler, an expediting clerk at our service center in Land O’ Lakes, Wisconsin.

Sickler followed the sound to a construction project at his Eagle River home. Inside the foundation for a new sun room, he found a stranded bear cub.

“I always knew we had bears in the area, but never saw one near our home until that night.”

The cub had fallen into the foundation and was frantically calling to its mother. Eager to avoid a confrontation with the adult bear, Sickler wisely stayed inside and called 911. The Vilas County Sheriff’s Department dispatched a Department of Natural Resources (DNR) warden to the site.

While waiting for the warden to arrive, Sickler and his wife watched the distraught mother bear pacing back and forth outside their home for over an hour. Meanwhile, the mom’s two other cubs were waiting in a nearby tree.

Sickler had a hunch the cub may climb up a ladder, if he could lower one into the foundation. When the DNR warden arrived, they agreed on the game plan. Within seconds of lowering the ladder, the cub climbed to the top.


“This was a million to one thing. I’ll never see anything like this again.”

The rescue, which was captured on video, has since gone viral. Sickler has seen it picked up by news sites in England, Australia, India, Iran and Israel. Here in the U.S., stations in Texas, Florida, California and many more have posted the video. And, of course, Wisconsin media outlets have been especially interested. Stations in Rhinelander and Wausau interviewed the Sicklers.

“It blows me away. We finally get our 15 minutes of fame. Well, this is well beyond 15 minutes.”

Introducing the falcon ‘Class of 2018’

The peregrine falcon nesting season has drawn to a close at our power plants. This season, we saw 16 chicks born at our facilities. 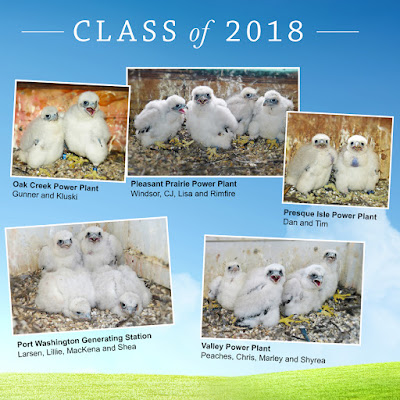 Hatchlings at four of our five sites have fledged, leaving empty nest boxes behind. Chicks remain at only one site, Presque Isle Power Plant in Marquette, Michigan. Dan and Tim likely will be leaving the nest box within a couple weeks. Watch them while you can on our live webcam feed at www.we-energies.com/falcons.

With the addition of this year’s chicks, the total number of peregrines born at We Energies power plants stands at more than 270. Nearly 20 percent of Wisconsin’s peregrine population has come from our company’s nesting sites.

We Energies has been participating in a large-scale experiment to see how augmented reality could fit into the energy industry to enable a more efficient and safer work environment in the future. The study is sponsored by the Electric Power Research Institute (EPRI) and is conducted by Marquette University.

Augmented reality is a technology that overlays a user’s view of the physical world with digital objects and information. Energy company employees could use augmented reality headsets to access data, history, procedures and maps of power plants and electric distribution equipment while on site.

Over the past year, power plant operators tested wearable technology for ergonomics. The test looked at four major concerns of using this hardware for workers in the energy industry:
Study results may influence developers of augmented reality equipment.

During a recent test of the equipment at the Elm Road Generating Station, Randy Scheck, plant central scheduler, said, “By participating in this testing, we can help advance technology and be prepared for possible future implementation.”

This EPRI study is one of many that We Energies has participated in over the past 20 years. One highlight noted by Marquette Professor Richard Marklin, who facilitates the research projects, was a study that led more electric energy companies to change from manual tools to battery-powered tools to cut cables. We Energies employees were the test subjects for that influential study.

“We Energies is really regarded as very progressive and is one of the leaders of safety and health across the industry. One piece of evidence of that is that We Energies adopted early on battery-powered tools,” said Marklin. “I sleep well at night knowing the work and studies we’ve done with We Energies have reduced the risk of injuries to workers.”

Eric Bauman, EPRI senior technical leader and program manager, stated, “This award is presented to We Energies for over 20 years of priceless in-kind support to advance the science, engineering and practical applications of ergonomics research conducted by the Electric Power Research Institute to improve the health, safety and quality of life for the dedicated workers in the electric utility industry and their families.”

“These studies really have an impact on our employees. Because of this tremendous partnership, employees are out there working safer, their careers may be longer, and they may enjoy retirement a lot more because they may be without the aches and the pains,” said Peterson.

Midwest Energy News feature article on the augmented reality study
Posted by We Energies at 10:37 AM No comments:

We’ve received special recognition for our crews’ contributions to the unprecedented power restoration effort in Puerto Rico earlier this year. Our industry trade group, the Edison Electric Institute (EEI), honored us with an Emergency Assistance Award at a ceremony in San Diego June 5.
We Energies, along with our sister company Wisconsin Public Service (WPS), sent more than 70 employees to Puerto Rico in January. They joined crews from nearly 60 other electric companies in what would become our company’s longest restoration mission to date. The majority of our employees spent eight weeks restoring power in Puerto Rico.

“We could not be more proud of our employees for dedicating two months of their lives to this humanitarian mission,” said Gale Klappa, our chairman and CEO. “This was an unprecedented effort for us, sending crews and equipment outside the continental United States for the first time in our company’s history.”

Aside from the awards ceremony, EEI organized a recognition event for Puerto Rico restoration workers at a San Diego Padres game. Line workers from dozens of utilities, including We Energies’ Kim Higginbotham and WPS’ Chris Fernandez, lined the field for the first pitch.

“The power restoration effort in Puerto Rico was a massive and unprecedented mission, and electric companies from across the country, including WEC Energy Group, responded to the call for help,” said EEI President Tom Kuhn. “The electric power industry pulled together with one goal in mind, to restore power to the people of Puerto Rico. It truly was one team, one mission. WEC Energy Group is deserving of this recognition for providing tremendous support to PREPA and our fellow citizens in Puerto Rico.”

On May 22, the Puerto Rico Electric Power Authority (PREPA) announced that power had been restored across the island to 99 percent of its customers who could receive electricity. This was a significant milestone that was reached by PREPA and its restoration partners, including the Federal Emergency Management Agency, U.S. Army Corps of Engineers and its contractors, and industry mutual assistance crews.
Posted by We Energies at 3:39 PM No comments: