Customers now can apply for energy assistance for the heating season. 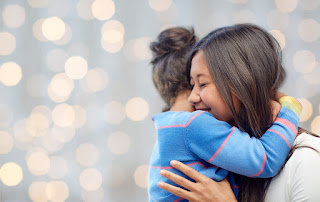 More families may qualify for aid this year due to changes in income eligibility. For example, an individual who earns $26,601 per year or less may qualify, and families of four that earn up to $51,155 per year also may qualify.

WHEAP provides qualified residents with a one-time grant to help pay energy bills. Qualification is based on income levels, not on whether someone is behind on paying their energy bills.

· Photo ID for applicant (first-time applicants only), including name and address

· Proof of income for all household members for previous three months

· Social Security numbers for everyone in the household

Customers with questions about their energy bills or payment options should call our payment assistance line at 800-842-4565.
Posted by We Energies at 4:32 PM No comments:

The public received a rare glimpse inside our historic headquarters during Doors Open Milwaukee this past weekend. The event, which drew nearly 800 visitors, was staffed by employee volunteers.

“Everyone was truly impressed. They thanked us immensely for spending our weekend here with them,” said Jennifer Eisner, manager of Customer Service at We Energies and organizer of the event.

Visitors called the building a hidden treasure in Milwaukee. Built in 1902, the Public Service Building (PSB), located at 231 W. Michigan St., was a central station for The Milwaukee Electric Railway and Light Co. a predecessor of We Energies. Milwaukee’s original streetcars operated out of the building. The building is on the National Register of Historic Places.

Feedback from visitors was overwhelmingly positive, according to Eisner. “Visitors told us the building was amazing and thanked us for opening our doors.”

Historic Milwaukee Inc. hosted Doors Open Milwaukee, a celebration of Milwaukee’s art, architecture, culture and history, now in its seventh year. More than 150 buildings are open to the public for two days every September to provide behind-the-scenes tours in Milwaukee’s downtown and surrounding suburbs.

The PSB was built in 1902 as a central station for The Milwaukee Electric Railway and Light Co., a predecessor of We Energies. Milwaukee’s original streetcars operated out of the building. Trains entered from Second Street, picked up their passengers, and then exited onto Third Street. At one point, the building was the largest interurban railway terminal in the United States.

As visitors approach the PSB, they sometimes notice the operating clock above the main entrance. Inside, attention is drawn to the marble lobby walls that came from an Italian quarry and include a curious architectural detail: a stained-glass window depicting a swarm of bees buzzing around a hive.

“We have received positive feedback every year since we started participating in Doors Open Milwaukee," said Jennifer Eisner, our coordinator for the event. “We are happy to show this architectural gem to the community, which would not normally have access to it.”

The PSB will open its doors from 10 a.m. to 5 p.m. on Saturday, Sept. 23 and Sunday, Sept. 24. Visitors are invited to tour the lobby and auditorium, and also can attend a presentation about the building and company history.

Our crews are home safe and sound after helping restore power to hurricane victims in Georgia. More than 30 workers embarked south last week and wound up in a rural area about 60 miles northeast of Atlanta. They spent two 16-hour days restoring power to customers that had been without electric service for several days following Hurricane Irma.

“It was an honor to be part of this major restoration effort,” said Area Manager Mike McNeil, who led the group. “The people we met in Georgia were so appreciative of our efforts. We’re happy we could help them in their time of need.”

One of the more memorable encounters was with members of Liberty Baptist Church in Lula, Georgia. Church members served meals to our crew members and prayed for them. They also thanked them publicly on the church’s Facebook page. 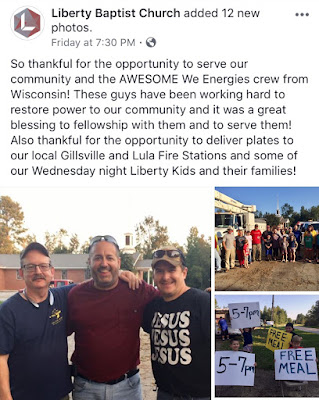 Crews were released to return to Wisconsin after host utility Georgia Power concluded restoration efforts. Crews from our sister company, Wisconsin Public Service, were re-routed to Florida after getting released in Georgia. They continue restoration efforts in a rural area west of St. Augustine.
Posted by We Energies at 3:35 PM No comments:

After driving about 800 miles, our crews have arrived safely in the metro Atlanta area where they’ll help Georgia Power restore electricity to hurricane victims. Their accommodations are modest, to put it mildly. They’re staying in bunk trailers at Coolray Field, home of the Atlanta Braves’ AAA team, along with hundreds of other utility workers from across the country. 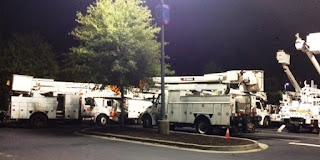 Crews are expecting to work double shifts several days in a row, restoring power wherever they’re sent. That means 16 hours working with just 8 hours resting. Initially, they’re working in the Gainesville area, about 60 miles outside of Atlanta. The area in the foothills of the Blue Ridge Mountains is rural and hilly. We’ll keep you posted on their progress. 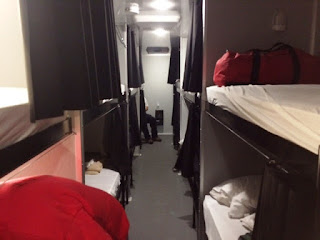 A caravan of nearly 20 We Energies trucks is headed south to assist with power restoration in the wake of Hurricane Irma. Millions of people remain without power in Florida, Georgia and other neighboring states. Full restoration could take weeks.

34 We Energies employees, from as far north as Iron Mountain, MI to southeast Wisconsin, are headed to the Atlanta area where they’ll assist Georgia Power with recovery efforts. Georgia Power still has hundreds of thousands of customers without power. Our crews may be re-routed to other areas after their work in Georgia is complete.


The electric power industry is mounting an industry-wide response to restore power in the region. Our employees are part of an army of more than 50,000 workers from across the U.S. and Canada. Just as we would expect to receive assistance after a major storm, we have answered the call for help. We’ve also released 100 contract employees to help in the restoration effort.
Posted by We Energies at 12:53 PM No comments:


We Energies Cookie Book recipes are perfect for celebrations of all kinds. No matter the occasion, you’ll find a recipe that’s just right.

Nana, Oma, Gramps, Pappy – no matter what name they’re called, grandparents are the best. This Sunday is National Grandparents Day, so why not celebrate with Grandma Loni's Butter Cookies?

This recipe was featured in the 2011 We Energies Cookie Book, which included 37 recipes from We Energies employees. 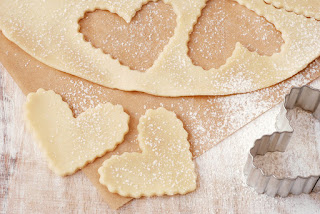 Preheat oven to 425 degrees F. Take 1/3 of dough from the refrigerator at a time and place on very lightly floured surface. Roll 1/8-inch thick. Cut with floured cookie cutters of desired shapes. Sprinkle with colored sugar. Place on ungreased cookie sheets; bake at 425 degrees for 5 to 7 minutes or until golden brown. Cool on wire cooling racks. Repeat with remaining dough. Makes about 6 dozen, depending on size of cookie cutters used.

Need some baking inspiration? Our Cookie Book archive has recipes dating back to the 1930s. Go online and find your new favorite today!
Posted by We Energies at 10:56 AM No comments: