The peregrine falcon nesting season is in full swing at our power plants. Eggs have been laid at three of our sites so far.

The first egg of the season appeared on the first day of spring, March 20, at our Valley Power Plant in downtown Milwaukee. Another egg appeared at the site March 22. A “full clutch” is considered four eggs, so we may see two additional eggs soon.

It was a pleasant surprise to find two eggs also present at our Port Washington nest box. We were having issues with the camera at this site, so we couldn’t see what was happening until recently.

And at our Oak Creek Power Plant, one egg is visible inside the nest box so far. You can keep tabs on all of our sites at we-energies.com/falcons. Hourly photos are available from each site. As soon as the eggs start hatching, we’ll again launch our live falcon cam. Stay tuned …
Posted by We Energies at 3:03 PM No comments: 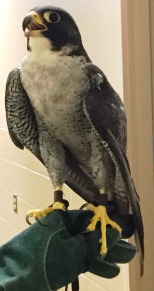 Downed lines and vehicles: Do you know what to do?

After an accident, many drivers want to exit their vehicles to check out the damage; however, if your vehicle has come in contact with a power line, that is the last thing you should do.

Stay inside your vehicle. Call 911 and We Energies to report the accident and the downed line. Do not exit your vehicle until rescue workers say it is safe to leave. Warn onlookers to stay away from your vehicle, because they could be at risk of being shocked by a downed line.


Recently, we responded to an accident near the city of West Bend, Wisconsin, in which an inattentive driver lost control of her vehicle and struck a power pole. The power pole was snapped in half, bringing down power and communication lines. The power line was energized.


Overhead power lines can carry more than 500,000 volts. Touching one of the lines can provide a path for electricity to the ground and hurt or kill you. Always assume all lines are energized and dangerous. They may not spark, hum or “dance.” Stay away from anything touching the lines, such as your vehicle, a fence or a tree.

When a live wire touches the ground, electricity travels though the ground in all directions. When the live wire is touching the ground, voltage decreases as distance from the wire increases. If you run or take large steps, you could conduct electricity from one leg at one voltage to another leg at another voltage, this could result in a shock in the ground is energized

If your vehicle contacts a power line, stay inside until rescue workers say it is safe to leave. If you MUST leave your vehicle because of fire or other danger, JUMP away from the vehicle so that you do not touch the vehicle and the ground at the same time. Then, land with your feet together and proceed to shuffle away.

The driver in the recent West Bend accident was not injured. 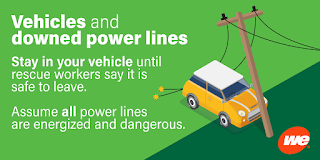 We take safety seriously at We Energies. In fact, 2015 was the safest year in our company’s history. We’re proud of that accomplishment, and it’s being rewarded through a program called the Safety Charity Challenge. When employees meet the company’s safety goals, they get to choose a charity to receive a We Energies Foundation donation.


Employees recently voted for the American Cancer Society (ACS) to receive $10,000 from our foundation. ACS representatives visited We Energies on Tuesday to say thank you.

“What We Energies is doing right now – being champions in the community – we are just so, so humbled and we thank you so much,” said MaryAnn Raash, senior director of corporate relations for ACS.

Tom Metcalfe, We Energies senior vice president of power generation, shared a personal story about his dad’s successful battle against cancer. “I think we can all agree that cancer is something that touches everybody’s lives in some way, either through a family member or a friend who is challenged with fighting cancer.“

Posted by We Energies at 9:31 AM No comments:

Since we started helping with the peregrine falcon recovery program in the early 1990s, more than 200 falcons have been hatched at our power plant nest boxes.

Check out our Raptor Report for updates and visit our falcon cam page for hourly snapshots of the nest boxes. After we see some eggs laid, we will activate our live webcam.

We Energies Raptor Report
We Energies falcon cams and information
Posted by We Energies at 2:45 PM No comments: 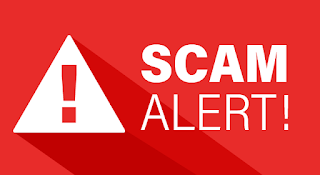 Several attempts of “front porch scams” were made in some northern suburbs of Milwaukee County recently. The scam starts with a suspect approaching the victim saying they are a city worker or from a utility company.

One Glendale resident recently became victim of this scam. The resident was approached by a man pretending to be a city employee, explaining that he needed to do tree trimming in the resident’s yard. While the resident was distracted by this individual, the home was burglarized.

The Glendale Police Department advises that if anyone is approached in this manner to deny access to your home. These scammers sometimes change their approach and say they are We Energies employees.

“The first thing they do is earn your trust,” said Tom Eells manager of corporate security with We Energies. “They identify themselves and explain a story of an accident or power pole that came down that may affect the victim’s power.”

Usually, a second criminal comes into the home while the first is distracting the victim and quickly grabs items such as jewelry, money and other valuables.

This scam is not unique to We Energies customers. It has been reported by numerous other utility companies in the United States.

Impersonating a utility worker in Wisconsin is a felony. If convicted, the felon can receive a maximum fine of $10,000 and/or a prison term of three-and-half years. Eells helped create the law back in the 1990s.

We Energies did have contracted tree trimming crews in the area at the time of these incidents, and it’s possible the suspects saw them working and used their work as a way to start a conversation with the victims. 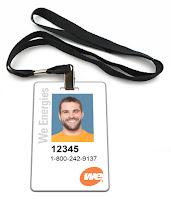 Be smart and stay safe with this tip:

A conversation with John McGivern 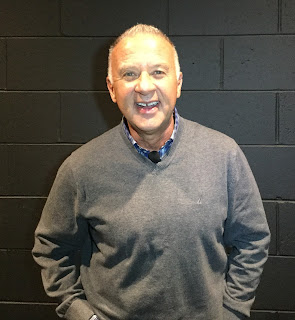 The We Energies Foundation is once again a sponsor of Milwaukee Public Television’s “Around the Corner with John McGivern,” now in its fifth season. The program follows McGivern as he explores life in a new community each week.

We caught up with McGivern at the Pewaukee, Wisconsin, preview event to discuss the latest season as well as our partnership with the program.

We Energies: Why is it so important to come back to the communities featured in the program and have a party?

John: It’s so funny, because the show has been on the air for five years. When we started the show, we thought we would be inspiring communities. We were foolish to believe that we were going to be the inspiration for communities. These communities are already inspired by what’s going on in their communities. The fact that we are able to show what goes on, we just highlight their inspiration. I think it’s important to have these previews because we introduce the people that took time to be in our show. We celebrate with the community. We thought of doing these community parties the first season and thought 45-50 people would show up. Now, a small event is probably 500 people, and we’ve had up to 1,300 people. It’s become an important part of our mission.

We Energies: The We Energies Foundation has been a proud sponsor of your program for a number of years now. We have a long tradition of serving the communities that are featured in this program, and we believe in your mission. What has our sponsorship meant to your mission?

John: Your sponsorship is really important. You have committed to our mission, which is community, and that is yours as well. I think we are a perfect fit, our show and We Energies. You have no idea how grateful we are that We Energies has committed to our show. We are proud to say [that], because of your commitment, we are able to continue [our mission].

We Energies: Do you think We Energies will ever be featured on “Around the Corner with John McGivern”?

John: Well, they better be! We should tour the We Energies building downtown. It really is something to see.

There are three more free community screening events coming up at which you can meet McGivern and watch the upcoming programs. See the schedule below. 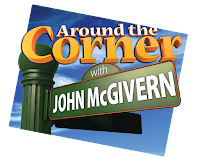 More information about “Around the Corner with John McGivern” is available on the MPTV website.