When storms swept through southeast Wisconsin on June 8, the contact center began receiving outage reports from customers. One of those calls led to life saving action.

The day after the storm, Angela, a seasonal consultant in customer services, took a call from a customer in Greendale, Wis., who had been without service for nearly a day. He called to ask when his service would be restored.

“During our conversation, he told me that he was using a generator to keep his sump pump running and that his two carbon monoxide detectors kept going off — so he just unplugged them,” said Angela. “That got me really concerned.”

She asked the customer either to leave the home or open the windows to let in fresh air. He refused, saying it was too cold and reasoned that if we could just restore his service, he could turn off the generator.

Angela offered to refer the customer to our gas dispatch department to check out his situation, but he declined assistance, ending the call.

Concerned for his safety, Angela consulted Jenea, a contact center support specialist and the floor manager on duty. Together, they decided to call 911 and report the situation. Authorities investigated.

About a week later, the customer called back and asked to speak with Angela. “He told me that I saved two lives that day and that he owed me a million thanks.”

The customer reported that several squad cars and two fire engines arrived. The first responders measured the carbon monoxide levels in his home, which were dangerously high. He said the rescue personnel told him that had he and his wife stayed in the house and gone to bed, they would have died of carbon monoxide poisoning. The customer thanked her for her persistence and compassion and praised the company’s training program and emergency response protocol.

Angela and Jenea are relatively new to their roles in customer services. The night of the 911 call was Jenea’s first evening assignment as floor manager, but they handled the situation effectively – as the customers can attest.

All of our consultants complete five days of outage and emergency training and are trained to recognize emergencies and respond accordingly as was done in this case.

Posted by We Energies at 9:18 AM No comments: 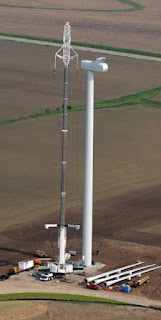 The wind turbines in our Glacier Hills Wind Park are now being constructed after a slight delay. Why the delay? No joke. It was too windy.

A large, telescopic crane is being used to erect the first of 90 wind turbines in Columbia County. Eleven trains from Colorado are delivering the 148-foot-long fiberglass blades and the nacelles, which house the gearboxes and generators. More than 800 trucks will travel to the site from Manitowoc, Wis., carrying the steel tower sections, which reach 262 feet when assembled.

The project is on track to be completed by the end of the year. We developed a Wisconsin-based alliance for design and construction. The alliance includes The Boldt Co. of Appleton, Michels Corp. of Brownsville and Edgerton Contractors Inc. of Oak Creek.

The project, which was approved by the Public Service Commission of Wisconsin in May 2010, will produce up to 162 megawatts, capable of providing power to more than 45,000 homes.
Posted by We Energies at 9:46 AM No comments: