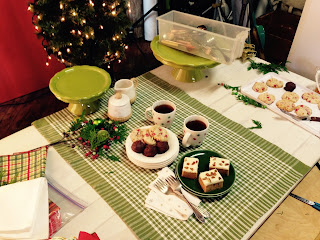 It may be August, but our 2015 holiday Cookie Book already is starting to take shape. We just wrapped up the photo shoot for this year’s book, and we promise it won’t disappoint.

Our designers and food photographer worked their magic like usual, producing many mouth-watering images. At right is a sneak peek.

The 2015 We Energies Cookie Book has a new twist this year. We’ve collected recipes from across the country under the theme, “Holidays across America.” As a result, this year’s book will be bigger than usual, giving customers even more delicious recipes. The book will include 51 recipes – one from each state, plus Washington, D.C.

Our distribution schedule is online, so check it out and mark your calendars now. Distribution starts in early November with signature events in Milwaukee and Appleton on Saturday, Nov. 7.

For more behind-the-scenes footage from our photo shoot, watch these stories from Fox 6 News and Today’s TMJ4:

Fox 6 - “Looking luscious:” We Energies gets its cookie book ready for holiday season

TMJ-4 – We Energies to release annual cookie book in November
Posted by We Energies at 1:19 PM No comments:

Crews installing a new gas main on Wells Street in Wauwatosa are taking a trip down memory lane. Underneath all the layers of concrete, they’ve unearthed old railroad tracks. They date back to the late 1800s, when Milwaukee’s original streetcars ran down Wells Street. 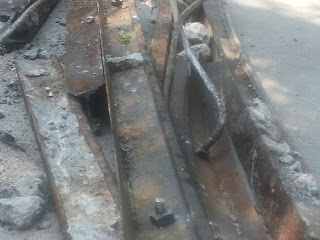 Our crews are upgrading a natural gas main in Wauwatosa, installing a new main underneath Wells Street. Before they can install the new pipe, they have to tear out the old trolley tracks. One crew has been busy ripping out the old steel tracks and railroad ties, while another crew follows behind to install the gas line. The old streetcar pieces are being hauled away to a scrap yard, but at least a couple are being saved for posterity. We’re told the historical society may get one. 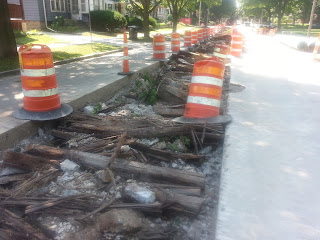 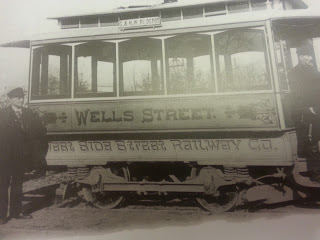 We looked through our archives and found this picture of an old Wells Street streetcar (bottom photo at right).

According to John Gurda’s “Path of a Pioneer,” Milwaukee’s first electric streetcar, a Sprague model, made its triumphal maiden voyage down Wells Street on April 3, 1890.

Known as the Route 10 streetcar line, it was the first streetcar route in Milwaukee and the first route to leave the city for a suburb.

According to Wauwatosa Alderman Dennis McBride who serves on the Wauwatosa Historic Preservation Commission, the old Wells Street line was a key component to Wauwatosa’s rapid growth from town to village to city.

The old streetcars operated out of our headquarters building on Michigan Street, called The Milwaukee Electric Railway & Light Company at that time.

Posted by We Energies at 6:49 AM No comments:

We've been having so much fun at Energy Park at the Wisconsin State Fair. We hope you've had fun with us too. There is still time to join us - the fair runs through Sunday, Aug. 16. 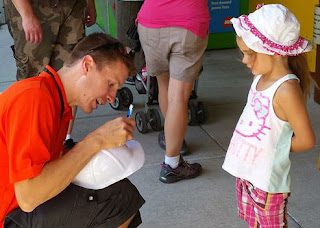 The best part of Energy Park is meeting you and your families. We enjoy sharing our safety messages with you through our interactive displays and games, keeping your kids safe with safety wristbands, and teaching you a thing or two about birds, gardening and cooking.

A mother reached out to us on Facebook to thank one of our employees for making her daughter’s day extra special.

“Going above and beyond at the Wisconsin State Fair - thanks for drawing Hello Kitty on my daughter’s hat,” said Melissa Graves.

Employee David Nestler was happy to make 4-year-old Mallory’s day. He said, “She reminded me of my daughter, so I thought I would draw something special on her hat.”

Graves says that her daughter has been showing off her custom hat ever since. 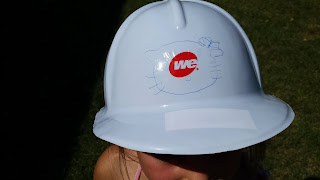 Graves brought her children to Energy Park for the first time this year. She said they loved learning what natural gas smelled like and what the inside of a gas meter looks like. They also enjoyed learning about our gardens.

If you have a story to share, feel free to direct message us on Facebook. We might feature your Energy Park story.
Posted by We Energies at 4:43 PM No comments:

Our customers come from all walks of life. Some live in the city, and some live in the country. One of the best things about the Wisconsin State Fair is that it brings these two groups together to learn more about country life, especially our Wisconsin farmers.

This is the second year we participated in the Blue Ribbon Cheese and Butter auction hosted by the Wisconsin State Fair Dairy Promotion Board. The board is made up of individuals and organizations who promote Wisconsin’s $43.4 billion dairy industry. The auction features the sale of blue-ribbon entries into the fair’s Cheese and Butter contest.

“Dairy farmers are important business customers, and we are happy to support them,” said Susan Crane, manager of our special projects.

The money raised at the auction supports scholarships for students pursuing dairy-related careers and the board’s dairy promotion efforts at the Wisconsin State Fair.

“We have a real commitment to help youth,” added Crane. “Developing a skill set of dedication and hard work through participation at the fair will help them throughout their lives.”

We Energies Foundation, is a nonprofit corporation that supports initiatives that promote culture and education in the communities in which we do business.
Posted by We Energies at 1:27 PM No comments: 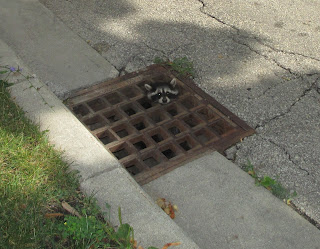 Two of our field employees came across an unusual sight today – a raccoon stuck in a sewer grate. They alerted their supervisor, who contacted the Wisconsin Humane Society.

The Humane Society sent someone to rescue the little guy, nicknamed “Walter the We Energies raccoon” by the workers who found him. We are told Walter is once again roaming the streets of Milwaukee.
Posted by We Energies at 5:15 PM No comments: