The Marguerite hit Milwaukee’s streets in 1896. Glowing with 700 incandescent lights, people could rent this flashy “party on wheels” for $5 an hour. Festively lighted trolleys like the Marguerite swayed down the city's streetcar tracks as festively dressed riders climbed aboard the open cars for a trip to Whitefish Bay Resort in Whitefish Bay or Wonderland Park in Shorewood. For many years, Milwaukee's streetcars were the transit people used in every kind of weather to get to work, school, and many other places. 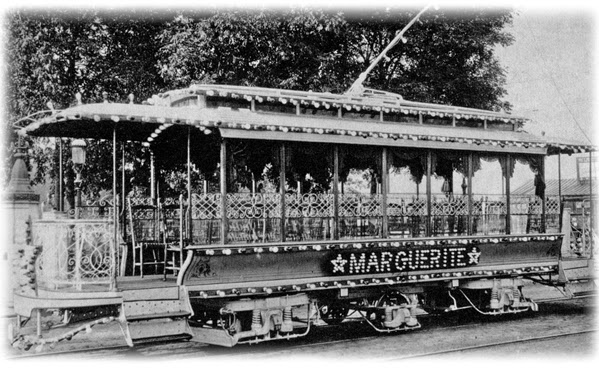 Posted by We Energies at 8:44 AM No comments: 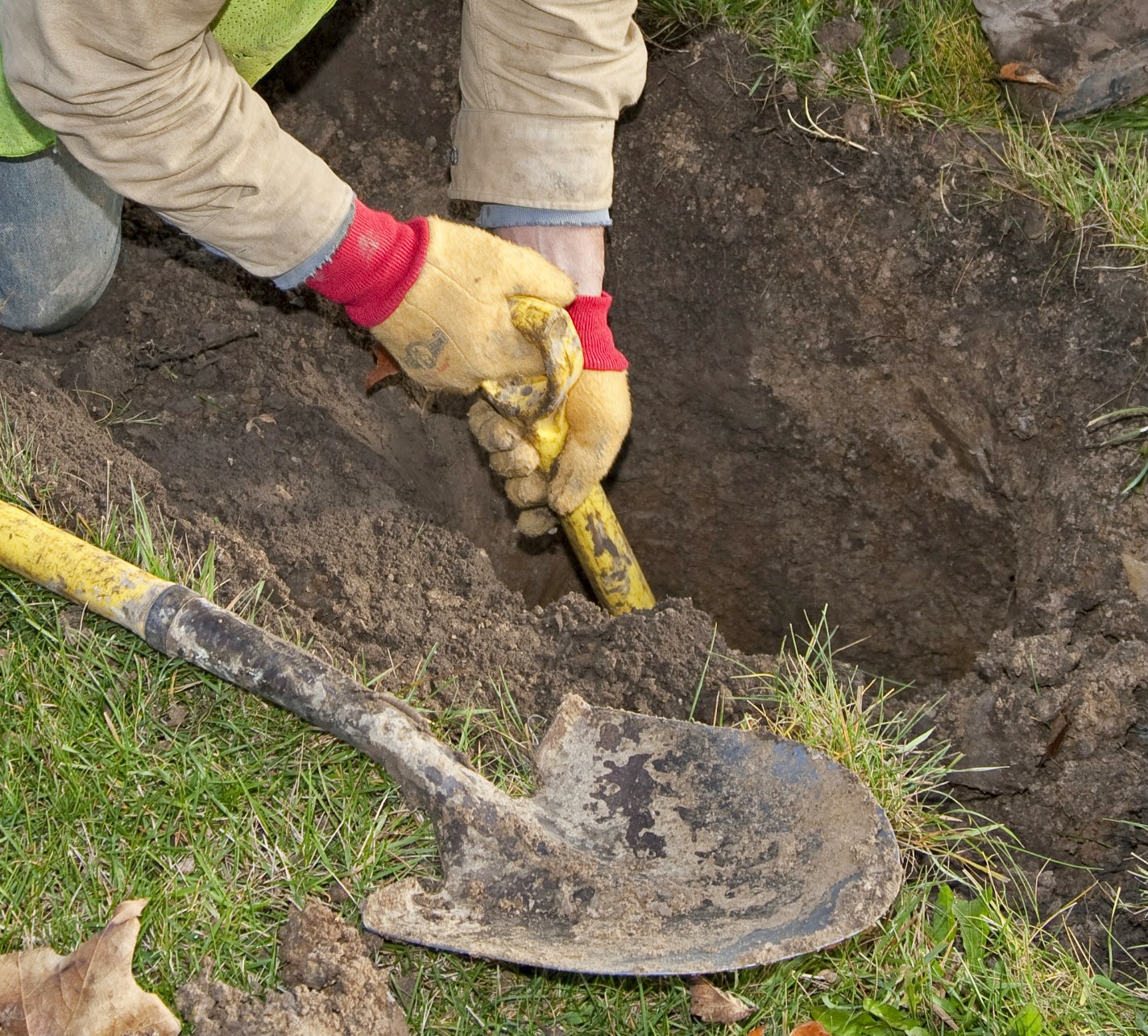 With planting season underway, remember to call 811 before you dig.

Nice weather has finally arrived, and you may be planning some outdoor projects requiring digging. Stay safe. Be sure to call 811 to have any underground utility lines marked, free of charge.

Call to have your lines marked at least three days before you start your dig. Once lines are marked, you are required to keep power digging equipment at least 18 inches away from the markings. Only use hand tools within 18 inches of the markings.

Safety tips also are posted on our website, and you can get information about landscaping around our equipment.

Digging, trees and landscaping
Posted by We Energies at 1:59 PM No comments:

Today is Arbor Day -- founded in 1872 as a special day set aside for tree planting. We are involved in several community activities this week to support Arbor Day.

One of the events sponsored by the We Energies Foundation takes place today in West Bend. About 750 serviceberry tree saplings have been purchased and will be distributed to fifth-grade students in the city. The students take the trees home to their families for planting.


Serviceberry trees are three-season trees that have white blossoms in the spring and red berries in the fall. They only grow to 15 feet, so they are perfect trees to plant to avoid power lines.


On Thursday, more than a dozen volunteers with Roots and Branches, a landscape and environmental improvement group, gathered to package the saplings for the students.

In addition, an autumn blaze maple tree will be planted at Decorah Elementary School to show students proper planting techniques. In advance of the event, students study the importance of trees in the environment.

When you plan to plant a tree, remember these tips:
More information on planting and landscaping safety
Posted by We Energies at 9:15 AM No comments:

Gypsum is best known as the main ingredient in wallboard, but back in colonial times, George Washington and Benjamin Franklin promoted its use in agriculture to maintain chemical balances between soil, water and plants.

Though gypsum is nothing new in agriculture, what is new is having a local source of gypsum in recent years.

WISN-12 agricultural gypsum news story
Posted by We Energies at 8:06 AM No comments:

Judge throws 'book' at scammer posing as We Energies 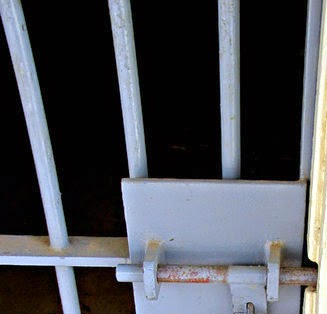 A crook who took part in a scam that cost one of our customers thousands of dollars will spend three years behind bars.

A Waukesha County judge handed down the maximum sentence to Samuel Petit-Frere. The Florida man was convicted for his role in an elaborate phone scam with roots more than a thousand miles away. In this case, the owner of an Elm Grove car wash was conned into purchasing a pre-paid credit card for an alleged overdue utility bill.

Investigators with the Elm Grove Police Department managed to trace the scam all the way to Florida, where Petit-Frere was arrested and extradited to Waukesha County for prosecution. This is believed to be one of the only successful convictions of this type of scam in the country.

Since the Green Dot scam first surfaced across the nation a couple years ago, about 3,000 of our customers have been targeted. Fortunately, only a few have lost money.

Customers who receive suspicious phone calls should hang up and call us directly at 800-242-9137 to verify their account status.

More information about the Green Dot scam
Posted by We Energies at 10:54 AM No comments:

We are again a recipient of a 2015 Tree Line USA award from the Arbor Day Foundation.

We have been honored with this award every year since 1998. Tree Line USA is a national program that recognizes public and private utilities for practices that protect and enhance America’s urban forests. This program is a collaboration of the Arbor Day Foundation and the National Association of State Foresters.

We achieved the award by meeting certain standards:
“Trees are a critical part of urban landscapes all across the United States,” said Dan Lambe, president of the Arbor Day Foundation. “Service providers like We Energies show that taking care of urban trees is good for business, good for customers and good for the community.”

Our website has multiple resources on tree and landscaping safety. Some of the topics include proper places to plant to avoid power lines and energy-saving planting tips.

Posted by We Energies at 2:08 PM No comments:

Thank you to our line mechanics 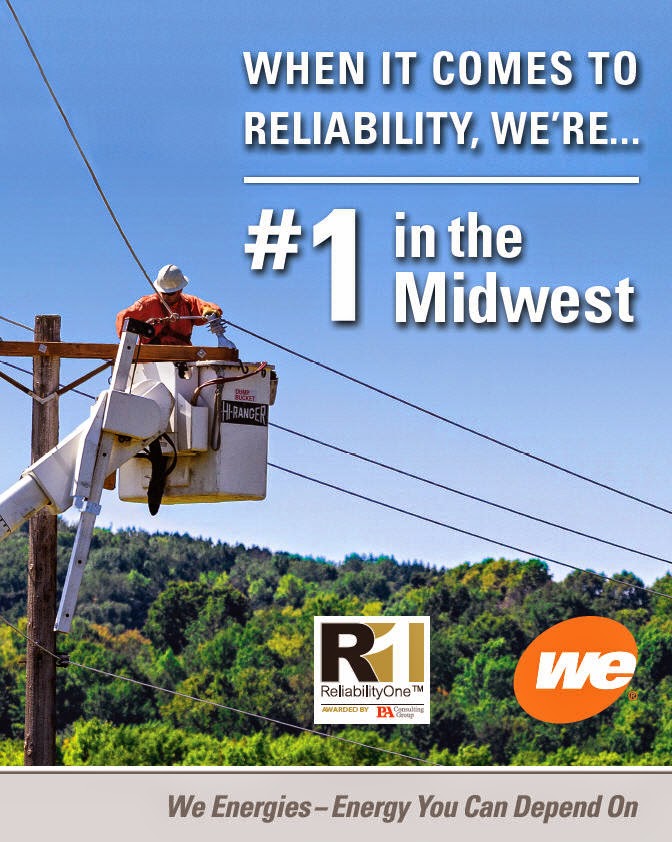 April 18 is National Lineman Appreciation Day, a time to recognize the contributions of the men and women who keep the lights on for our customers.

The U.S. Senate designated April 18 as National Linemen Appreciation Day two years ago with a special resolution. Senate Resolution 95 is a resolution “recognizing linemen, the profession of linemen, the contributions of these brave men and women who protect public safety, and expressing support for the designation of April 18 as National Lineman Appreciation Day.”

“Our linemen are the backbone of our company,” said Kevin Fletcher, our senior vice president – customer operations. “These men and women work around the clock in all types of weather to ensure our customers have power. We can’t thank them enough for the important and dangerous work they do, putting their lives on the line to protect public safety and keep our system intact.”

Learn more about the work of our line mechanics and troubleshooters:
Careers: Line mechanics
Keeping the Lights On: Responding to Trouble

All six of our power plant nest boxes now have peregrine falcon eggs.

The resident female at our Presque Isle Power Plant in Marquette, Michigan, laid her first egg this morning.

Eggs also are present at five other power plants – Pleasant Prairie, Port Washington, Oak Creek, Valley and Milwaukee County. If a full clutch is achieved at each site, we could see a total 24 chicks born this spring.

Posted by We Energies at 2:52 PM No comments:

Our crews never know what they’ll encounter out in the field.

Take Customer Service Technician Steve Wesolowski, for instance. Last Thursday, torrential downpours led to flash flooding in some areas. Wesolowski was returning to our Menomonee Falls Service Center when he came upon a minivan floating in floodwater on Kaul Avenue in Menomonee Falls. He could see a frantic woman and three children inside.

Wesolowski immediately pulled over and called 911 while a second passerby helped carry the children to safety. The family was scared, cold and wet. Wesolowski placed them inside his heated We Energies vehicle to keep them warm until the fire department arrived. The family was relieved and appreciative of his efforts.

“That minivan easily could’ve tipped over, leaving the family trapped inside,” he said. “I’m grateful that I drove by when I did.”

CBS-58 video and story
Posted by We Energies at 9:14 AM No comments: