The two peregrine falcon chicks that hatched earlier this month at Port Washington Generating Station now have names. The names were suggested by customers.

The female is named Amara, which was suggested by the family of a 10-month-old girl named Amara Burmeister-White. She suffers from a rare form of cancer. Her family says she has the strength and courage of a falcon and wanted one of the birds to share her name, which means "everlasting." Amara met Amara at the banding, which took place this morning (photo above).

The male falcon is named Kilowatt. Given that he was born at a power plant, Kilowatt seems fitting.

Since we began our peregrine falcon recovery program in 1997, more than 150 peregrines have been produced at our power plant nest boxes.

Here's a short video clip of our two feathered friends...

Posted by We Energies at 2:30 PM No comments:

The first wind turbine components are arriving in the project area for the 90 turbines being constructed as part of the Glacier Hills Wind Park in Columbia County. Each turbine consists of four tower sections, three blades, a hub and nacelle. The first components to be erected are the bottom two tower sections. Once in place, grouting will be done between the tower and foundation. Next, the top two tower sections will be installed.

Once the tower sections are erected, the nacelle (the enclosure at the top of the tower that contains the generator and transformer), electronic controls and associated equipment will be erected and secured. The nacelle is reached by a ladder that runs inside the tower so technicians can access the turbine components for maintenance and repair. The hub, which is connected to the drive shaft that passes into the nacelle, is then erected, followed by the turbine blades. The blades will be attached to the hub in the air.

When completed, the total height of the turbines, from base to blade tip, will be 410 feet. We expect the first turbines to be operational in August. 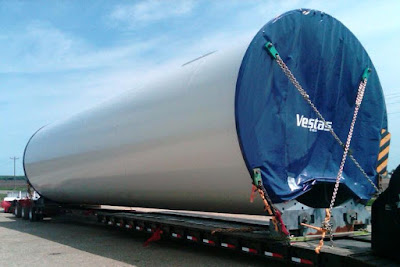 Sections for the turbine towers began arriving this week.


Go to related story in Portage Daily Register
Posted by We Energies at 9:15 AM 1 comment:

We filed a rate proposal with the Public Service Commission of Wisconsin (PSCW) on May 27, which calls for no increase in rates for 2012. If approved, base rates would stay the same for 2012, and we would file a regular rate case next year for new rates in 2013. This alternative approach is being proposed in response to the fragile economic recovery expected to continue through next year.

With this alternative approach, we would absorb costs in 2012 with the expectation that the economy will continue to strengthen into 2013. The projected rise in fuel costs is expected to be offset by returning proceeds obtained from the our successful settlement with the Department of Energy over spent nuclear fuel.

While economic conditions are slowly improving, both residential and business customers continue to feel the impact of the challenging economy of the last few years. A weak housing market, higher costs for groceries and increasing gasoline prices continue to contribute to difficult economic circumstances for customers.

Delaying a rate increase for 2012 may benefit customers, but we still will need to recover investments already approved by the PSCW over the past several years to strengthen reliability, comply with changing environmental requirements and meet the state’s renewable energy mandate.

If the PSCW determines that any part of this approach is not acceptable, we would have to withdraw the plan for no base rate increase in 2012 and then proceed with a traditional, comprehensive base rate request.
Posted by We Energies at 8:51 AM No comments: