Residential customer bills lowest in more than a decade

Over the past 12 months, the average residential combined natural gas and electric bill has gone down. Customers paid about $20 less per month than five years ago and paid less in energy costs than any year in the past decade. 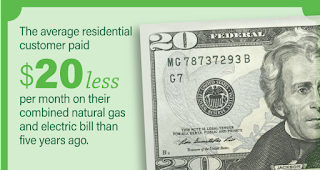 Low natural gas prices, a mild winter and stable electric rates have all contributed to the recent drop in customer bills. During the just-concluded winter heating season, We Energies natural gas customers paid less to heat their homes than during any winter since 2000.

We’ve been able to keep customers bills down, while continuing to be the most reliable utility in the Midwest for five years in a row. While we can’t control the weather or natural gas prices in the future, we have done our best to control costs so that we can freeze base rates through 2017.
Posted by We Energies at 8:51 AM