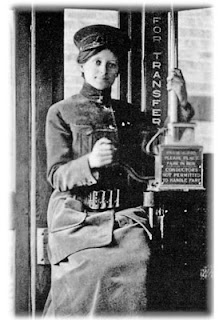 World War I opened many nontraditional jobs for women. Between 1914 and 1917, more than 600 "Electric Company" employees entered the military. Most of their jobs were filled by women.

Across the U.S., about 1.6 million women joined the workforce between 1914 and 1918, filling positions in government, transportation, factories, post offices, businesses and agriculture. Many worked in munitions factories, which employed as many as 950,000 women.

While many women worked to provide for their families while their men were at war, others worked just to help the nation succeed in the war. Women also bought Liberty bonds, and observed days for conserving food, as well as abiding by numerous laws to aid the war effort.