The seven-mile parade became a Milwaukee tradition. Santa Claus and his six reindeer were the main attractions. More than 300,000 gathered to see the parade every year. Schuster's created a character known as Billie the Brownie to promote the event.

The photo at right was taken in 1927. TMER&L was one of our predecessor companies, which  later changed its name to Wisconsin Electric Power Co. -- now doing business as We Energies.

The Milwaukee Electric Railway & Transit Historical Society has a history of TMER&L on its website.

In 2009, the Museum of Wisconsin Art in West Bend  hosted the Worlds of Wonder: Armin O. Hansen's Festive Float Designs exhibit. For 31 years, Hansen was the designer of the parade's floats. You can learn more about the parade and its floats in this 10-minute WUWM podcast produced to promote the exhibit:

In 2011, OnMilwaukee.com published a Michael Lisicky interview. Lisicky is author of a book about Milwaukee's Downtown shopping culture, "Gimbels Has It!"

In 2012, Dave Begel of OnMilwaukee.com published a column about Billie the Brownie. 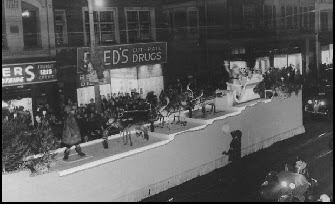