We expect to begin commercial operation of the new powerhouse at the aging Twin Falls hydro plant this summer. The plant borders Wisconsin and the Upper Peninsula of Michigan on the Menominee River. 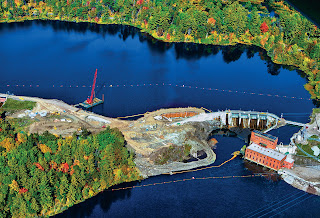 Built in 1912, the dam is licensed to operate to 2040. The powerhouse was built at the same time, but its condition is such that it won't be able to operate for the license duration. Various repairs and upgrades to the dam and spillway structures have been completed since the mid-1960s, and now the powerhouse is being addressed.

The new powerhouse is being built on the Wisconsin side of the Menominee River to replace the current one on the Michigan side. The project also includes additional spillway capacity to meet current Federal Energy Regulatory Commission (FERC) safety standards.


Building on the opposite side of the river allows the existing plant to continue generating electricity during the time the new powerhouse is be built.