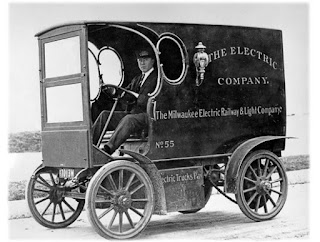 A new form of advertising was on the rise when vehicles such as this electric service truck became signboards on wheels in the early 1900s. Formed in 1896, The Milwaukee Electric Railway and Light Company became known as "The Electric Company" as shown on this truck.

Wow very amazing .I like it very much and they old information about truck drivers.

Thanks for posting this.