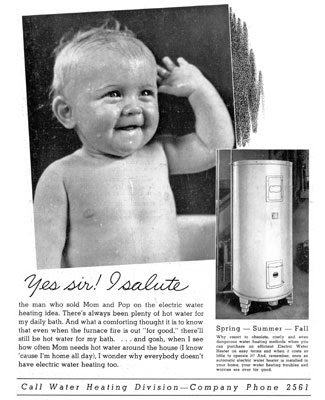 This 1941 ad touts the benefits of electric water heaters – warm bathing water for families – and promotes electric water heaters as safer, easier and more efficient than gas models. An Englishman, Benjamin Maughan, invented the first instant water heater in 1868 called “The Geyser,” a device where the water was heated as it flowed into the bath. They were known to be dangerous.

Maughan’s invention influenced the designs of a Norwegian mechanical engineer named Edwin Ruud, who immigrated to Pittsburgh and invented the electric water heater. Ruud's design consisted of a large tank to store water and an electric heat source to warm it to the desired temperature.