A connection that will span generations

In a unique connection that will span generations, an Iraq War veteran will share the experience of a Stars and Stripes Honor Flight with our honored World War II and Korean War veterans Sept. 12.

Robert (Bert) Garvin, executive vice president – external affairs, will serve as a guardian for the flight sponsored by We Energies. A guardian serves as a trained, traveling companion to an Honor Flight participant. 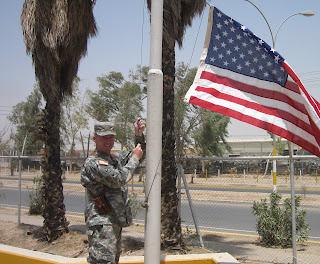 Garvin is excited to meet and share stories with the 89-year-old veteran that he will accompany. The veteran served in World War II with the Army Military Police from 1944 to 1946.

“I am honored to have the opportunity to participate in this flight. I have talked to the children of some of our WWII veterans and feedback has been the same—besides their wedding day and birth of their children, the Stars and Stripes Honor Flight is one of the best days of their lives,” said Garvin.

One topic certain to be discussed between the two veterans will be about family.

Although Garvin faced many challenges in Iraq, he spoke more about the challenges military families face at home. When he was called up, his wife was pregnant with their second child, and his daughter was just one year old. Garvin says the effect long deployments have on families is tough. He says that families serve, too—repeating what he heard during his own pre-deployment training: “when a soldier deploys, the family deploys.”

“I returned home with a renewed sense of appreciation not just for the freedoms we enjoy as Americans—but for my family. As a military spouse, my wife, Heidi, endured a long deployment; missed birthdays and anniversaries—all with a calm, strong presence for our young family. She did an amazing job,” said Garvin.

In today’s war, communication between families is a little easier than in the wars of the past. Email and online video calls help families stay connected. In the Korean War and World War II, military mail was the only means to access the world they temporarily left behind.

In that tradition, We Energies employees wrote more than 500 thank-you cards and notes to the veterans who will participate in this Saturday’s flight. The “Mail Call” will be distributed to the veterans on their return flight.

Garvin served in the U. S. Army as the senior trial counsel for the 40th Corps Support Group in Operation Iraqi Freedom IV.

He was stationed at Logistics Support Area Anaconda in central Iraq, approximately one hour north of Baghdad. His base was nicknamed “Mortaritaville” and was subjected to frequent rocket attacks and mortar rounds during the year he served.


Stars and Stripes Honor Flight will fly its 29th mission on Saturday, Sept. 12. The We Energies-sponsored flight will take local WWII and Korean War veterans from southeastern Wisconsin on a free, one-day trip to Washington, D.C., to see their memorials.