#FridayGiving: We Energies honored with EPIC Award by the United Performing Arts Fund

We’re proud to be longtime supporters of the United Performing Arts Fund (UPAF), but this year, our employees really stepped it up. We were recently honored with the EPIC (Exceptional Performance in a Campaign) Award by UPAF. The award, which is not often bestowed, acknowledges participating companies that produce exceptional results from their employee giving campaign. 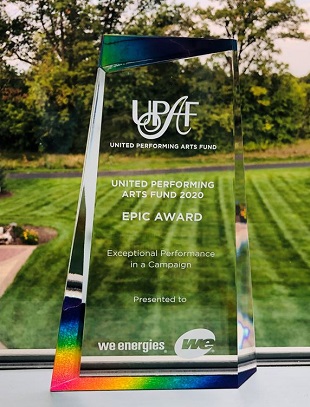 While total giving to the UPAF umbrella organization was slightly down this year, due in large part to the effects of the COVID-19 pandemic, We Energies employees increased their total pledges to UPAF from approximately $135,000 in 2019, to more than $163,000 in 2020.

“During these very challenging times, UPAF is literally a lifeline for our performing arts,” said Tom Metcalfe, president – We Energies, acknowledging the importance of the award-winning employee support. “UPAF is working closely with each member organization to ensure they are best positioned to get through this pandemic and are able to deliver world-class performances and community engagement in the years ahead.”

Due in part to the success of the We Energies employee campaign, the communitywide campaign raised approximately $11.7 million. In addition, a dedicated “Kasey's Fund,” named in honor of the daughter of UPAF's outgoing CEO, Deanna Tillisch, raised more than $720,000 to support two community outreach programs that focus on increasing diversity, inclusion and equality within the performing arts.

Since the early 1980s, We Energies has invested hundreds of millions of dollars in communities across the state.

Read more about our yearlong effort to highlight some of the incredible organizations we support here.