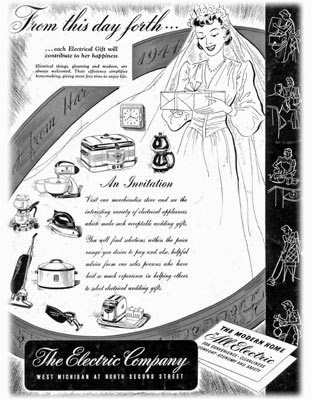 The "Electric Company" produced this ad in 1941 to persuade consumers to buy electric appliances as gifts, especially for special occasions such as weddings.

Energy conservation became a major theme during World War II, with the company’s appliance repairmen reporting “exceedingly heavy demand” for their services as customers sought to save energy by keeping their appliances in good working order. Such actions were part of our commitment to the war effort.
Posted by We Energies at 9:35 AM