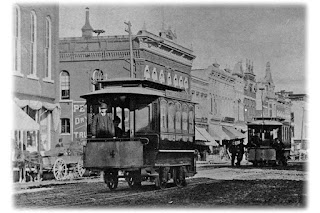 Beginning in the 1860s, horse-drawn streetcars moved people around Milwaukee, but on April 3, 1890, the Wells-Wisconsin line of the West Side Railroad Co. became the city's first line to use electric streetcars.

West Side Railroad later merged into the Milwaukee Street Railway Co., which became The Milwaukee Electric Railway and Light Co. in 1896. The company was a predecessor of Wisconsin Electric Power Co. -- now doing business as We Energies.
Posted by We Energies at 9:38 AM