Solar may be added to generation supply 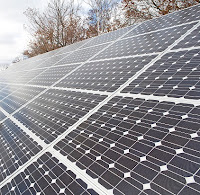 We're looking at adding 12 megawatts (MW) of electricity generated by the sun over the next three years, further diversifying our power sources and expanding our use of renewable energy.

The addition requires Public Service Commission of Wisconsin (PSCW) approval. If approved, the first solar generation projects would be built on property we already own and would have a total capacity of approximately 5 MW. The projects likely will be included in the 2013 electric rate case for Wisconsin customers. These projects would be planned for service in 2014. We expect to include the other 7 MW of projects in the rate case planned for filing in 2014, for rates in 2015. Final costs and locations for projects have not yet been determined.

As part of our 2009 settlement with environmental groups concerning the water intake permit for the expansion units at Oak Creek, we committed to fund environmental projects in Lake Michigan and to expand production of renewable energy through biomass and solar power projects.
Posted by We Energies at 11:18 AM