Asplundh forestry crew members Todd Lyles, Chris Goral, Jon Bax and Jason Anderson performed like heroes to rescue an accident victim in Big Bend. Two Asplundh crews under contract to We Energies were trimming trees along Highway 164 on Jan. 17 when an area resident alerted them about a car that slid off the snowy roadway, flipped over and landed upside down in a pond.

Approaching the vehicle, the workers couldn’t see how many people were in the car because the windows were tinted. With water beginning to fill the car, they took action quickly. Because of the water pressure, the doors wouldn't open, so they tried flipping the car over, but it was too heavy for the four men to get the car back on its wheels. With the car now turned on its side, they flagged down other drivers on the highway to help. Two men stopped to help flip the car the rest of the way and get the driver out.

The driver was a young woman who had just dropped off her son at day care. She was taken to the hospital but later released with no injuries. The four Asplundh employees went home to change clothes and returned to the job site to complete their work day.

The rescued driver was Alyson Beisiegel, the daughter of We Energies employee Jill Zaruba, business manager – customer field operations. Beiseigel asked an Asplundh crew member to call her parents to tell them she was in an accident but OK. "These men saved my daughter’s life,” Zaruba said. 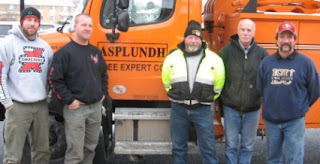 Asplundh crew members who made the rescue, left to right: Jason "JJ" Anderson, Jon Bax, Chris Goral and Todd Lyles, far right. Second from right is Greg Great, who supervises the crews.
Posted by We Energies at 11:17 AM