For decades, We Energies has supported the recovery of bald eagle and osprey populations. These raptor species once thrived in the Midwest, but DDT use and habitat loss led to dramatic population declines between the 1950s and 1970s. Wisconsin’s Department of Natural Resources (DNR) has watched their development over the last four decades. In 2016, the DNR recorded the highest number of nesting sites since monitoring began in 1973.

“The comeback of our great raptors since their near-demise just over 50 years ago is truly remarkable,” said Mike Grisar, principal environmental consultant at We Energies. “Without the hard work of the resource managers and the aid of utility companies, the recovery of these species would certainly not have been so successful.”

Utilities have a major role to play in raptor conservation due to the species’ nesting habits. Bald eagles and ospreys both tend to build their large nests in the tallest trees available – or, on occasion, the tallest utility poles, which can result in power outages and harm to the birds.

We have worked with the DNR and environmental nonprofits since the early 1980s to help raptor populations recover. Our Bald Eagle Protection Plan prevents disturbances to nesting eagles, preserves canopy trees for future nesting sites and offers public financial incentive to report raptor nests on company lands. When we discover an occupied nest near a project site, we evaluate each situation and develop a strategy to avoid impacting active nests. 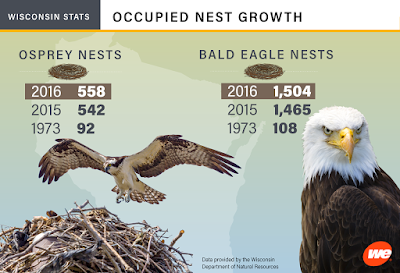 Our field crews also erect nesting platforms for raptors, primarily osprey. As these raptor diets rely heavily on fish, the platforms are typically raised near water. They stand taller than any manmade structures in the area, encouraging raptors to choose them in favor of utility poles, and they expand nesting opportunities in wetlands, along lakeshores and in other areas with limited mature tree growth. Company crews have installed nest platforms in nearly 30 Wisconsin and Michigan counties across our electric service areas. We collaborate with environmental and wildlife agencies to monitor raptor activity and attach leg bands for conservation research.

Grisar has helped coordinate company efforts for raptor recovery since the mid-2000s, and he has seen their numbers rise almost every year. He is optimistic about their future in Wisconsin and Michigan.

“It is an honor to work for a utility company that has such commitment to environmental stewardship, and it is humbling to know we have made such a difference,” Grisar said.
We are dedicated to keeping our customers and local wildlife safe. With nests weighing up to 200 pounds, eagles and ospreys can damage power lines and cause arcing, power outages and nest fires. If you see a raptor building a nest on a live power line or utility pole, please contact our 24-hour customer service at 800-242-9317.