A pair of ospreys in the Fox Valley has a new option to call home. Our crews recently installed a nesting platform near Fremont, Wisconsin, giving the pair a safer option than their original preference – atop one of our utility poles.

Ospreys frequently attempt to nest on top of our power poles, which can result in power outages and harm to the ospreys. In this case, we were able to work with a local wildlife organization, The Feather, and a private landowner to secure a site
for a nesting platform.

Ospreys are listed as a special concern species in Wisconsin after their population declined significantly in the 1950s and ‘60s due to widespread use of pesticides such as DDT. We have installed dozens of osprey platforms since the late 1980s.

There’s no guarantee the pair will find and use the new platform, but it’s ready for them come nesting
season.


Photos courtesy of The Feather.

Jim Prothero always has had a passion for engineering and science. As a young boy, he loved building with erector sets. He had a natural curiosity about how things worked. When he was about 8 years old, he remembers taking apart one of his family’s clocks. Unfortunately, he couldn’t put it back together. But that frustration only fueled his drive.

By high school, it was clear Prothero wanted to pursue engineering as a career. He went to the University of Wisconsin - Milwaukee (UWM), where he earned a degree in electrical engineering. He also completed graduate work at UWM and the Milwaukee School of Engineering.

In 1974, Prothero reported to work at We Energies. His skills were recognized, and he earned increasing responsibility with each job assignment. Eventually, he was managing the company’s electric distribution system - overseeing planning, maintenance and reliability of the grid.

For these efforts – and many, many more – Prothero has been awarded the 2015 Outstanding Personal Achievement Award from PA Consulting. He accepted the award Oct. 22 at a ceremony in Miami.

He says he was surprised to receive the award, and initially wondered, “Why me?”

“Through my work with the Edison Electric Institute and the Electric Power Research Institute, I’ve met a lot of talented people out there,” he said.

He’s also quick to give credit to his colleagues. “The reality is: it takes a team to make everything work, and I have the most dedicated and hard-working team at We Energies.”

Congratulations to Prothero for his commitment to our company and reliability of electric service to our customers.

Posted by We Energies at 9:30 AM No comments:

We Energies named best at keeping customers’ lights on

Our customers can rest assured they’re in good hands. For the fifth year in a row, we’ve been named the most reliable utility in the Midwest.

We Energies received the ReliabilityOne™ Award at a ceremony in Florida last night. The annual award recognizes utilities that excel in delivering reliable electric service.

Kevin Fletcher, executive vice president - customer service and operations, accepted the award on the company’s behalf. “This is a testament to our employees who put our customers first in everything they do. From the folks answering customers’ calls to the line mechanics scaling poles in the middle of the night, our team takes reliability very seriously.”

We’re in the midst of a major overhaul to keep delivering reliable electric service to our customers. Between now and the end of 2019, we plan to rebuild nearly 2,000 miles of distribution lines that are more than 50 years old. We also intend to replace more than 18,000 utility poles and 20,000 transformers.

WISN-TV visited one of our major project sites. Watch this video of our crews in action:

WISN-TV report of distribution upgrades
Posted by We Energies at 9:25 AM No comments:

Heating costs could be lowest in more than a decade

The cost to heat your home this winter could be the lowest in more than a decade. Based on normal winter weather and natural gas prices remaining where they are today on the spot market, we estimate the average residential customers would pay 18 percent less to heat their homes this winter as compared to the winter of 2014-15.

Along with being the lowest-cost heating season in 14 years, the average residential customer would pay: 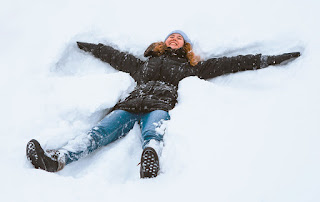 The calculation to determine normal winter weather is based on the average of daily temperatures during the past 20 winter heating seasons.

Natural gas continues to be the most affordable and reliable home heating option. The abundant supply of natural gas this winter is due in large part to stable domestic production levels.

We use a natural gas purchasing strategy that includes buying and storing a portion of our customers’ natural gas supply during the summer months when prices are traditionally lower.

For additional savings check out our energy-saving ideas such as furnace tune-ups and programmable thermostats on our website.
Posted by We Energies at 12:37 PM No comments: 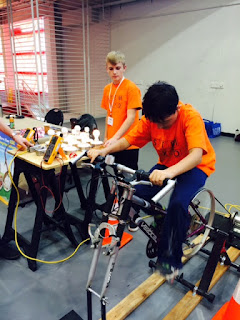 What can you do with a bicycle, a motor and spare parts? Make energy!

Our engineers had a popular display at this weekend’s STEM Expo at the Milwaukee School of Engineering (MSOE). STEM is science, technology, engineering and math.

Dozens visited our display to try out a generator bike. The stationary bike uses a treadmill motor to produce energy. Students pedaled the bike and turned on lightbulbs. Different types of bulbs – LED, CFL and incandescent – helped demonstrate energy efficiency.

This is the second year we have participated in the American Society of Civil Engineers’ annual STEM expo at MSOE. The event invited students to discover the world of science, technology, engineering and math at different exploration stations. The goal is to inspire a new generation of engineers.

Posted by We Energies at 1:37 PM No comments:

The Milwaukee Fire Department (MFD) honored We Energies at its Meritorious and Community Service Awards Ceremony last night. The annual ceremony celebrates courageous men and women of the MFD, Milwaukee Police Department and civilians who have gone above and beyond the call of duty.

We Energies was recognized with a Community Hero Award for the company’s close partnership with MFD when responding to emergencies. 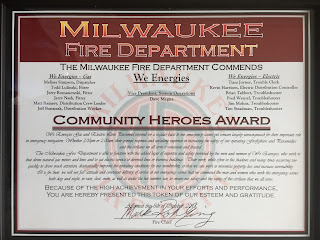 “We Energies gas and electric line personnel, who respond on a regular basis to our emergency scenes, remain largely unrecognized for their important role in emergency mitigation,” said Deputy Fire Chief Aaron Lipski. “Whether 2 p.m. or 2 a.m., their prompt response and unfailing expertise in increasing the safety of our operating firefighters and paramedics and the civilians we all serve is consistent and focused.”

We Energies natural gas and electric workers often are requested at active fires to shut off natural gas service or de-energize electric lines to make it safe for firefighters to do their job.

“Their work, while often in the shadows and many times occurring too quickly to draw much attention, dramatically improves the operating conditions for our membership so that we can work to minimize property loss and increase survivability,” said Lipski.

Posted by We Energies at 2:10 PM No comments:

Customers now can apply for energy assistance for the upcoming heating season. 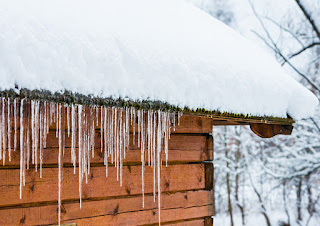 More families may qualify for aid this year due to changes in income eligibility. For example, an individual who earns $25,600/year or less may qualify and families of four that earn up to $49,200/year may also qualify.

WHEAP provides qualified residents with a one-time grant to help pay energy bills. Qualification is not based on whether someone is behind on paying their energy bills. Instead, the benefit amount is determined by several factors including household size, income level, energy costs and others.

Customers with questions about their energy bills or payment options should call our payment assistance line at 800-842-4565.
Posted by We Energies at 10:40 AM No comments: