The world's first hydroelectric central station was placed in operation on Sept. 30, 1882 in Appleton, Wis. About the same size as a shed, the plant featured an Edison "K" type dynamo that produced about 12.5 kilowatts of electricity from a water-powered turbine to light three buildings -- two paper mills and the home of industrialist H.J. Rogers.

Built by the Appleton Edison Electric Light Company, the Vulcan Street Plant was the first Edison hydroelectric central station to serve a system of private and commercial customers and the beginning of electric generation in our service area.

The Edison crew in Appleton was under orders to delay the plant's opening until its parent company's Pearl Street Station made its debut as the nation's first central power plant on Sept. 4, 1882

The Vulcan Street Plant burned to the ground in 1891, but a replica was built on South Oneida Street in 1932 and moved in 1987 to its current location on the banks of the Fox River on South Vulcan Street, near its original location and the Lawe Street Bridge. The site is a National Historic Mechanical Engineering Landmark and part of the Fox-Wisconsin Heritage Parkway.

Roger's home, which is now the Hearthstone Historic House Museum, 625 W. Prospect Ave., is one of the few surviving examples of wiring and lighting fixtures from the dawn of the electrical age.

Sept. 19 is International Talk Like a Pirate Day. Avast ye lubbers! Here be some energy-savin' tips to save yer treasure in th' blust'ry months before ye.

Stars and Stripes Honor Flight (SSHF) soon will release a coffee table book that captures the emotion and events of the Honor Flight experience. Proceeds from the book benefit Honor Flight and Fisher House Wisconsin.

Through breathtaking photographs, “Honor Flight: A Visual Journey” celebrates WWII veterans as they travel on a Stars and Stripes Honor Flight to Washington, D.C., to see their memorial. SSHF curated five years of photographs from 18 Honor Flights to find the most moving images that tell the Honor Flight story through the eyes of the nation’s aging heroes.

Proceeds from the book will be shared evenly between Stars and Stripes Honor Flight and Fisher House Wisconsin. SSHF will use the proceeds to fund future Honor Flights out of Milwaukee. Fisher House will break ground at the Clement J. Zablocki VA Medical Center in early 2014 to build a "home away from home" for veterans so their family members can be close to them during hospitalization for illness, disease or injury.

Our parent company, Wisconsin Energy Corporation, has partnered with Stars and Stripes Honor Flight since its inception, helping sponsor flights, as well as the Field of Honor event in August 2012 at Miller Park. We Energies and the Wisconsin Energy Foundation helped underwrite the book. 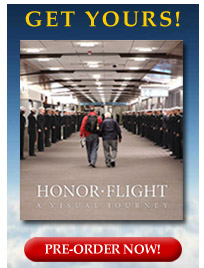 “Honor Flight is all about saying ‘thank you.’ But sometimes thank you is not enough,” says Joe Dean, founder of Stars and Stripes Honor Flight. “What we realized during the process of the Honor Flight experience, is that we shouldn't wait 70 years to show our veterans how much we appreciate them. We have young servicemen and women returning from their tours of duty hurt and in need of healing. Fisher House helps our wounded warriors heal with their families close at hand. We want to help make that happen here in southeast Wisconsin. We believe a family's love is good medicine.”

“Honor Flight: A Visual Journey” sells for $100. Visit HonorFlightBook.com or call Stars and Stripes Honor Flight at 262-238-7741 to pre-order the book. The book will be available at any of Steinhafel's 16 locations, Visual Image Photography and other retail outlets beginning Veteran's Day, Nov. 11, 2013.

Stars and Stripes Honor Flight will have two more flights this year, on Sept. 21 and Nov. 2. The November flight will feature two planes, one of which will be exclusively for Korean War veterans. Nearly 2,700 veterans have taken a Stars and Stripes Honor Flight since its inception in the fall of 2008.
Posted by We Energies at 11:06 AM No comments: 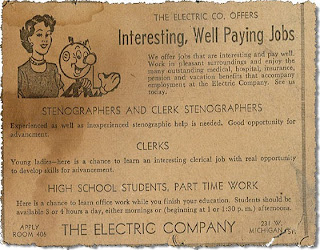 One of our employees at the West Bend Service Center recently replaced his garage insulation and while removing the original insulation -- mostly old newspapers from the 1950s -- discovered this advertisement concerning employment at the "Electric Co."

Though our name has changed, and we no longer feature Reddy Kilowatt, we're still interested in finding qualified candidates to join our company. Learn about the types of careers we offer and see openings for various positions on our website's Careers page.