“Surely you can’t be serious.”

You may remember those familiar lines from “Airplane!” Now, the brains behind that classic movie are branching out from comedy to cookies.


David and Jerry Zucker were born in Milwaukee and raised in Shorewood. They submitted a recipe for this year’s We Energies Cookie Book, and it made the cut. David talked about the honor during a recorded segment for WUWM-FM’s “Lake Effect” program.

The Zuckers’ mandelbread recipe actually comes from Charlotte Zucker, the filmmakers’ mother. She passed away in 2007, but her memory lives on in this delicious recipe, as well as in cameo appearances in her sons’ films. She played the lipstick lady in “Airplane!”

David recalls coming home from both college and L.A. to freshly-baked mandelbread. His sister now makes the sweet treat and sends it to David and his family, who are spread out across the country. The mandelbread pieces are usually “gone in seconds,” he said during the interview. “They’re addicting. They’re so good.”

“Tens of thousands of people could be out there making your mom’s mandelbread recipe,” Mitch Teich, “Lake Effect” host, added.

The interview airs Nov. 15 on “Lake Effect,” which begins at 10 a.m. Tune in to 89.7 FM or find the show online after it airs. http://wuwm.com/programs/lake-effect 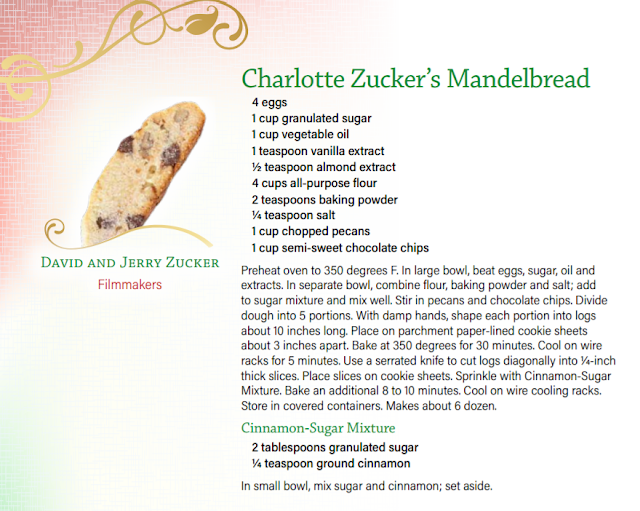