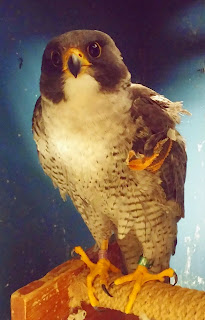 Herbert, a peregrine falcon that had been born at our Valley Power Plant 11 years ago is recovering after being found injured in the backyard of a Wauwatosa home.

Herbert is being treated at the Wisconsin Humane Society’s Wildlife Rehabilitation Center, where vets discovered he has a dislocated elbow and a shot from a pellet gun embedded in his abdomen.

The pellet is believed to have been there for a while and is not related to the elbow injury.

Herbert has nested at several locations around Milwaukee. Most recently, he was nesting at St. Joseph’s Hospital with his mate DJ. Herbert and DJ incubated four eggs this spring. Recently, all four hatched. Peregrine parents take turns incubating eggs, hunting and feeding the young. In Herbert’s absence, DJ was left alone to do the job of both parents.

For the best survival of the chicks, Peregrine Falcon Manager Greg Septon transported two of Herbert’s chicks to our Oak Creek Power Plant to be cared for by female, Eclipse, and male, Scott. This spring, Eclipse and Scott incubated four eggs at our Oak Creek site, but they never hatched. Another falcon tried taking over the nest box, and the territorial battle left the eggs unattended too often. Now, Eclipse and Scott still have a chance to be parents and have adopted two of Herbert’s chicks as if they are their own.

We may never know how Herbert injured his elbow, but it appears he will recover during the next several weeks, according to experts at the rehabilitation center.

Also of concern was the pellet found by the veterinarians. This is not the first time a peregrine falcon has been shot. In 2014, Madame X, a female falcon from the Milwaukee County Power Plant was found shot in West Allis. After many months of recovery, Madame X was released back to the wild.

Peregrine falcons are endangered species in Wisconsin. They also are protected under the federal Migratory Bird Act. Shooting a peregrine falcon is a serious crime, punishable by jail time and fines.

We have been involved in Wisconsin’s peregrine falcon recovery effort since the early 1990s and have nest boxes installed at six power plants, where more than 200 peregrines have been born.
Posted by We Energies at 11:44 AM